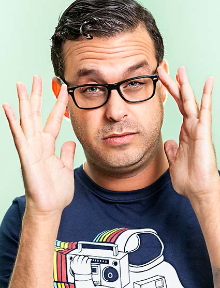 Joe DeRosa has made a name for himself in comedy and entertainment with six top-ten charting stand-up albums and a multitude of performances on television, radio, and in comedy clubs across the country and around the world. Joe’s most recent one hour special titled You Let Me Down premiered on Comedy Central in 2017, which he wrote, performed and directed. He currently recurs on AMC’s Better Call Saul as crooked veterinarian Dr. Caldera and hosts two heavily followed podcasts: We’ll See You In Hell with Patrick Walsh, where the two review genre movies, and Taste Buds*—a food debate show—with Impractical Jokers’ Sal Vulcano. The latter is distributed through DeRosa and Vulcano’s co-owned No Press Productions Network. Other select credits include: Inside Amy Schumer, Louie, Bored to Death, Chelsea Lately, Grand Theft Auto V, and two half-hour Comedy Central specials. Joe has also written, directed, and starred in a series of web shorts. Additionally, his writing has been featured on HBO’s Crashing, Comedy Central’s Jeff and Some Aliens and Netflix’s Wet Hot American Summer, as well as The Pete Holmes Show.


In addition to the two-item minimum, there will be an 18% administrative fee in the showroom.

Customers are expected to take necessary precautions to protect themselves and others. Per the CDC and local governments, we require all customers enter the facility wearing a face covering or mask. When customers are seated, they are permitted to remove such covering while eating or drinking.

Joe DeRosa started stand-up comedy by hitting the Wednesday night open mic at the Laff House in Philadelphia, PA. Within a year, he was a regular there and at all the major clubs in the surrounding area.

It was not long before Joe made the jump to New York City to take up comedy as a full time gig. He quickly began working frequently at New York venues such as Caroline's, Stand-up New York, the Laugh Factory, and Gotham Comedy Club. He also made appearances on "Last Call with Carson Daly," Comedy Central's "Premium Blend," and the "New Faces" showcase at the Montreal Comedy Festival.

In addition, he's performed on national tours such as Dave Chappelle's "Block Party Tour" and the "Insomniac Tour" with Dave Attell. Joe continues to perform constantly, making television appearances and headlining clubs and colleges both in and out of the country.